Why Barbados is the Perfect Diving Destination 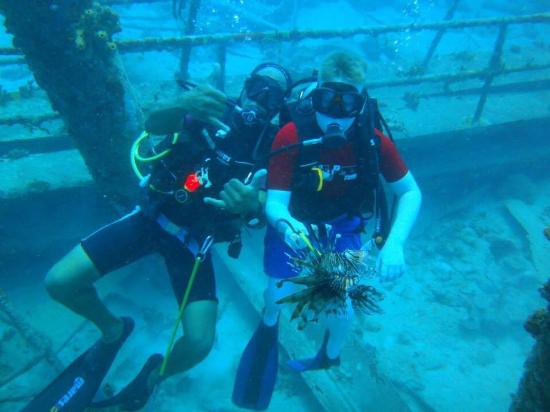 If you are looking for one of the best places to take a diving holiday then Barbados is an obvious choice. The seas off the island’s coast have some of the healthiest and most stunning coral reefs in the Caribbean and there are some fascinating shipwrecks to explore. And with visibility up to 100 feet and warm waters to boot, the conditions are perfect for new and experienced divers alike. What’s more, for the times when your back on shore, Barbados has a wealth of great things to do and some exceptional resorts to stay at.

Barbados is surrounded by great places to dive but for the ultimate experience its always helpful to use the services of a local tour operator who knows the best places, times and conditions in which to dive – and which are appropriate for your level of experience. There are many tour operators on the island and, aside from taking you out, they can also teach beginners who haven’t been diving before. Here are some of the dives you may want to experience.

Perhaps Barbados’ most amazing dive, the Stavronikita, (Bajan’s just call it the Stav!) is a 365ft Greek freighter put out of action in 1976 because of a tragic onboard fire that claimed the lives of several crew members. Rather than salvage the vessel completely, it was towed into Carlisle Bay, stripped of the more expensive metals, had its remaining fuel cleaned out and was then, in 1978, purposely sunk just 400 yards from the coast as a way to help create an artificial reef.

Its proximity to the coast and the shallow waters (between 30ft to 85ft deep) where it lies, means it is easily accessible and this, together with its size, has made it one of the most popular dives in the area. It is possible to go into the ship’s superstructure and have a good look around. Aside from the wreck itself, the ship is encrusted with sponges which attract turtles, barracuda, mackerel and various other marine creatures.

Friar’s Craig was a 100 ft long, Dutch freighter anchored off the south coast of Barbados for 10 years before it sunk in July 1985. In the subsequent years, surge damage has broken apart the hull into three parts and it has since become a bustling habitat for local marine life.

The Marine Park at Carlisle Bay is a mix of an underwater conservation area and adventure playground. The island’s authorities have purposely sunk several ships in the bay to create artificial reefs which, today, have a thriving ecosystem with a wide range of marine life living amongst them. However, the bay’s proximity to the island’s capital and major tourist resorts means that the wrecks and the aquatic animals that live there are a major attraction for divers, snorkellers and the tourists on the Atlantis, Barbados’ own passenger submarine.

The shallow and clear waters, the number of wrecks and the sheer abundance of brilliantly coloured wildlife have made this a popular diving destination for experienced and new divers. Expect to see everything from corals, turtles, sea horses, frogfish, stingrays, octopi, barracudas, squid, moray eel and more.

The best of the six wrecks to explore include the Berwyn, a 70ft French tug sunk by its own crew at the end of WWI. With the top of the wreck being less than 10 feet below the surface, it’s easy to get to and is home to a lot of fascinating reef life.

Another ship, The Eillon, had a colourful past, being used to smuggle drugs from Columbia. Its illegal enterprise wasn’t successful, however, and after 6 years in Barbadian custody, the 110ft craft was sunk in 1996. Although deeper than the Berwyn, it is still easily accessible and penetrable. It even has an air pocket in its bow.

The island’s first ever tug, The Bajan Queen, holds fond memories for Bajans as she was converted into a party boat that many people had memorable times upon. She now lies just a few feet beneath the surface and instead of party goers is now the home to a wide range of fish and coral. At 120 feet, she is the largest of the Carlisle Bay wrecks.

Another interesting wreck is that of the Canadian freighter, Cornwallis. This ship was the victim of a WWII torpedo and sank some distance away from the island in an area that had lots of marine traffic. To reduce the possibility of it being struck, part of it was relocated to the Marine Reserve in 2003. Today, a 38 feet section of the ship lies close to the Bajan Queen.

Besides wreck sites, Barbados also has some wonderful reefs to visit. Two of the best are Maycocks and Shark Bank. Maycocks is at the north of the island and is as stunning on land as it is underwater. Here you’ll find large patches of corals with pathways of white sand between them. Expect to see barracuda, stingray and the occasional reef shark. Shark Bank is on the south coast and very shallow, between 60 and 150 feet. Here, you can find lots of parrot fish, unicorn fish and turtles.

With 60 miles of tropical coastline, warm seas, crystal clear waters, easy to get to wrecks and a preponderance of reefs and marine wildlife, Barbados has everything you need to create the perfect diving holiday. We also have great food and drink, wonderful entertainment, a beautiful island and the warmest welcome the Caribbean has to offer.

If you are looking for exclusive, luxury villas and apartments within easy reach of the major diving tour operators, check out Royal Westmorland.